FOCUS: KOREA
The experimental group Choi X Kang explores the possibilities of movement through connecting the human body with various technologies. The production monitors the borders of stage space and time; it received a prize at the most important Asian choreography competition – Yokohama Dance Collection.
DISCUSSION follows 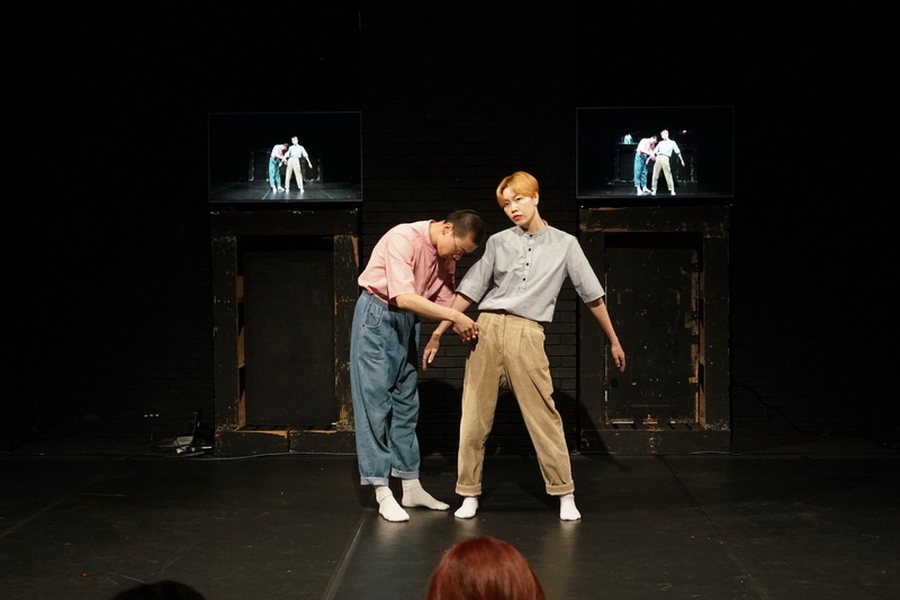 What happens with the world outside beyond our view? And do we have a chance to influence it? The imaginative production Complement creates new perspectives on space and time perception with the use of a camera as a means of selective recording of reality in confrontation with repetition of simple dance moves. The audience becomes part of an imaginary editing room where the stage image is supplemented with individual choreographic elements, which are further edited, cut, or distorted as if it was an animated film.

“The dancers of the Complement production perform systematically repeating movements, which are simultaneously screened on two TV sets in the background. The view of the camera therefore provides another dimension and seemingly creates the immediate aspect of the choreography. The recorded shots distort the reality as they hide certain parts of the whole picture – the stage then resembles the work of the Iranian cartoonist and author of satirical comic strips Mana Neyestani.”
KOREA DANCE WEBZINE, 7/2016

The Choi X Kang Project is a project-based group of artists around Choi Min-sun and Kang Jin-an, based in Seoul, Korea since 2015. With their work, they focus mainly on exploring new possibilities in movement through means of confrontation of the human body with external devices and modern technologies. At the Seoul Dance International Collection competition, which has produced the work of various competent Korean choreographers, they won with their performance called Basic Dance (2015), which brought significant support for their further progressive work. Thanks to this award, they were able to start cooperation with visual artists as well as dancers from Singapore or Bulgaria and also broadened their portfolio with performing in art galleries. Their production Complement was awarded the Jury Prize at the Yokohama Dance Collection 2018, one of the most prestigious choreography competitions in Asia.