A memory of Self-Accusation as well as a new direction for Na zábradlí theatre. --- The jubilee anniversary of the Flora Theatre festival seems apt to retrospect. Dušan D. Pařízek offers an unexpected score. Six years ago, within the director’s focus at the festival, we saw his staging of Peter Handke’s drama Self-Accusation with the amazing Austrian actress Stefanie Reinsperger who was also the face of the 2016 FLORA festival – in the picture with audience member and light designer Pařízek in the first row. Pařízek, thus, comes back to this text in Na zábradlí theatre once again… 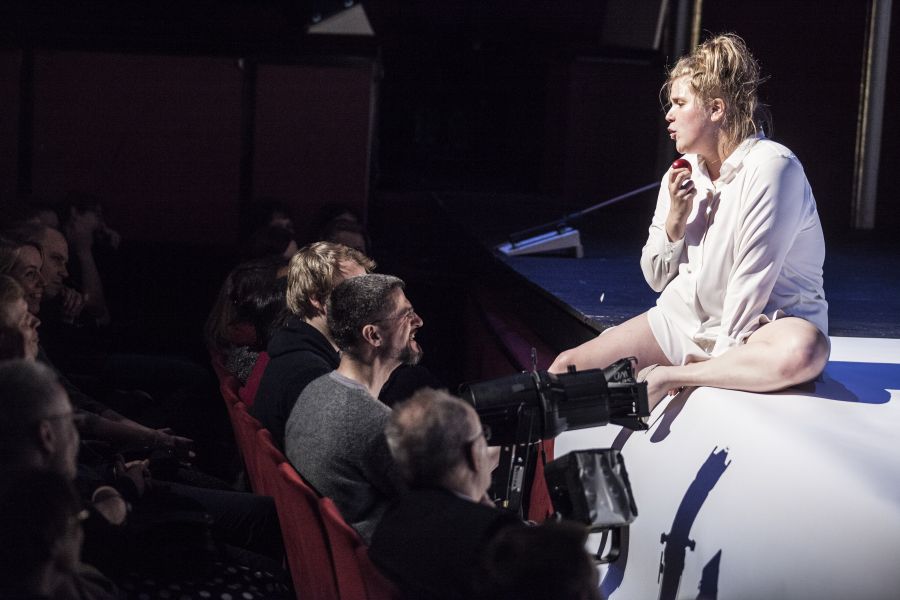 Pařízek’s return to the bitterly entertaining Self-Accusation at Divadlo Na zábradlí theatre, as well as its surprisingly well-suited connection with the last of the Handke texts Zdeněk Adamec, holds promise for an exceptional theatre experience. Pařízek follows up not only on his previous Czech interpretations of Handke’s texts with this exclusive double production –by casting Stanislav Majer, Martin Pechlát and Jiří Černý, actors of the former Pražské komorní divadlo (Prague Chamber Theatre) – but also on his series of German-speaking productions where he questions national myths and their verifiable truthfulness.

In the current staging of Self-Accusation, the director focuses on reflections on the personality of Peter Handke as a well-known figure with a controversial reputation. The great author awarded with the Nobel Prize – as well as a notorious instigator – is portrayed by the exceptional German actor Samuel Finzi. The festival audience has therefore a unique opportunity to “enter the same imaginative river twice” with the director.
The production ZDENĚK ADAMEC.SELF-ACCUSATION will be shown on two dates. It always starts at the Church of the Virgin Mary of the Snow and continues in S-klub. Ticket sales will open on 11 April 2022.
Friday 20. May 7.30 pm
Saturday 21. May 4 pm