Festival Trailer is out!

Right before the Russian attack on Ukraine, the cameraman Paul Schwarz and our dramaturge Dominika Široká and other former colleagues of hers from Schauspiel Köln were shooting this year’s festival spot. Its main protagonists is Stefko Hanushevsky – the hero of the opening production from Cologne directed by Rafael Sanchez Stefko Hanushevsky tells the Great Dictator. 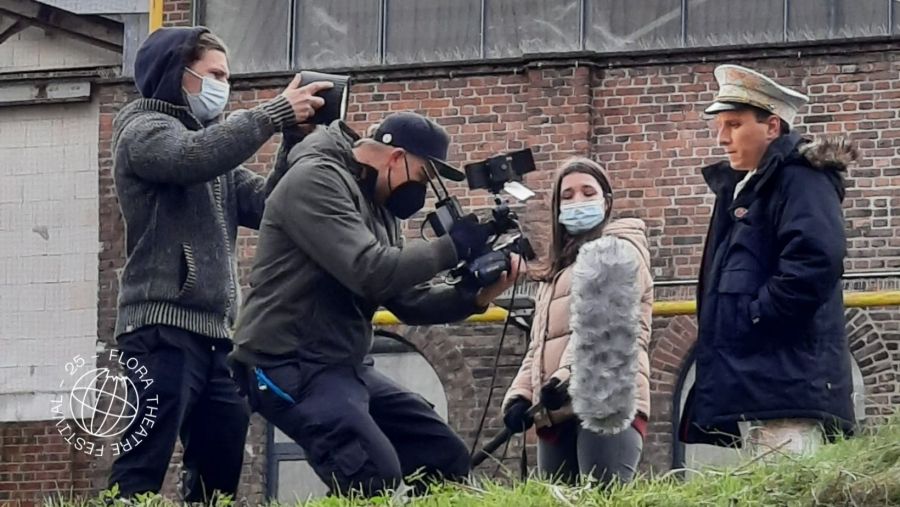 The filming was organized at the beginning of February thanks to the generosity of Schauspiel Köln. The exterior of the theatre in Cologne, which is just being reconstructed, provided an ideal setting for the festival spot which relates to the major production of this year’s festival. The organization team comprised of Jochen Ohr, Christoph Odendahl, Tim Borner and Caroline Binaie from Schauspiel Köln.
Director Vít Hradil and musician Alexander Maschke also participated in the final video.

Chaplin’s message of peace from the iconic, eighty-year old anti-war film The Great Dictator which served as inspiration to Hanushevsky’s solo, is therefore heading toward the festival audience also through other media and social networks… We referred about the production, why it was chosen for Flora as well as the unsettled context here.

We would like to thank our friends in Cologne, Mannheim and Munich and are looking forward to seeing you in May!