Five actors on an imaginary raft, lost in the middle of the ocean, in an allegorical vision of a disintegrating world. A visually enthralling production by the Czech-French ensemble
choreographed by an original personality of the local dance scene – Marie Gourdain.
Discussion follows. 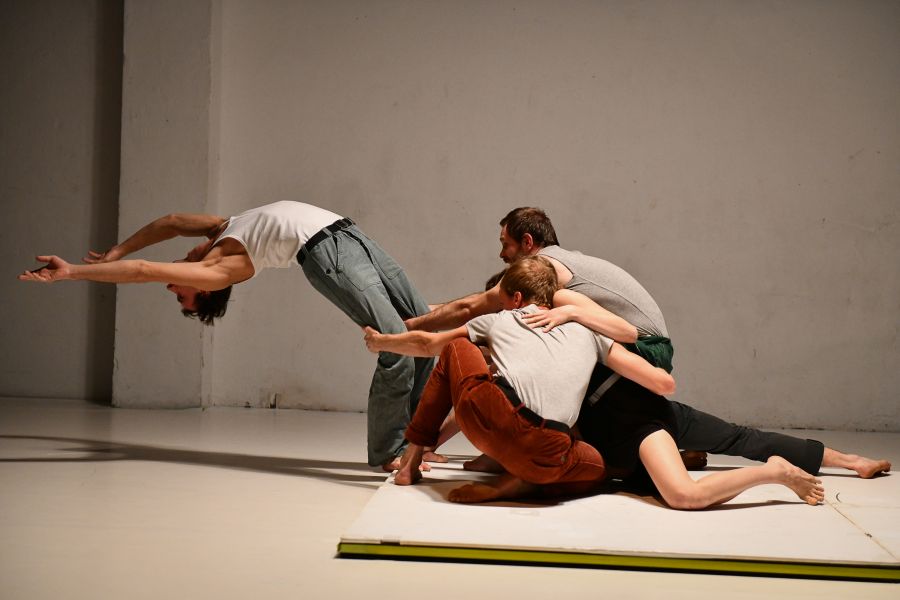 The visual art background of Marie Gourdain contributes to the original stage concept, which issues in a Medusa recast to the theme of the monstrous insecurity of transformation. The dancers precisely capture the rapture caused by the incessant oscillation between an end and a beginning, the known and the unknown.
Natálie Nečasová / Erbesová, Taneční aktuality, 20 December 2018
Anytime that one of the dancers throw themselves ‘overboard’ in a burst of tense movement, others quickly catch him and prevent him from the imaginary fall. Sculpture-like images of fighting for one’s life are therefore created as if coming out of the Géricaul picture.
Simona Baková, Mloki.sk, 25 April 2019

Marie Gourdain is a French sculptor, stage designer, animator and choreographer currently based in Prague. She studied film animation at the L'École nationale supérieure des Arts Décoratifs in Paris and then studied at the Academy of Arts, Architecture and Design in Prague. She explores the connection between presence and the absence of the human body in her works.
She created set design for the productions Different? (Barbora Látalová and Zdenka Svíteková, 2016) and IMAGO (Lucie Kašiarová, 2014) or the site-specific event of KoresponDance festival (Dominique Boivin and Jean Gaudin, 2014–2016). Apart from her productions in the Czech Republic, she also works abroad, such as at international theatre and visual art projects in France and Switzerland. She had her debut as a choreographer in 2016 with a dance solo for two bodies called UN (One), which was also created during a residency at the Baroque space of the Wurmova 7 venue in Olomouc, the former address of Divadlo na cucky. The show was shown at 2015 Flora as a work in progress presentation.
Marie Gourdain met the light designer Zuzana Režná and the performers/dancers Florent Golfier and Lukáš Karásek, at that time students of Clown Stage and Film Creation studio at Janáček Academy in Brno, while working on the production Pisum Sativum (2012). The four artists formed the group tYhle in 2015 – a platform for performing and visual arts, dance and physical theatre. The name of the group refers to the Generation Y, as well as its graphic form expresses the intersection of different lines, directions and inspirations. The inclination towards physical theatre is clear mainly in their works Umbilicus (2014), Tešlon a Frkl (2015) or Výš (Higher, 2017). Through cooperation with Marie Gourdain, the productions of the collective move more towards visual art. Her choreographies work with the body as a material in all its beauty and ugliness. In her work Un (One,2016), the body of the dancer Florent Golfier is forced to react to changes discreetly made in space by a second person, while the performance Mu—Tation (online 2020) studies the possibilities of transformation of a body in a visually colourful metamorphosis of the human being and the world.
photo Michal Hančovský, Pavel Oslík 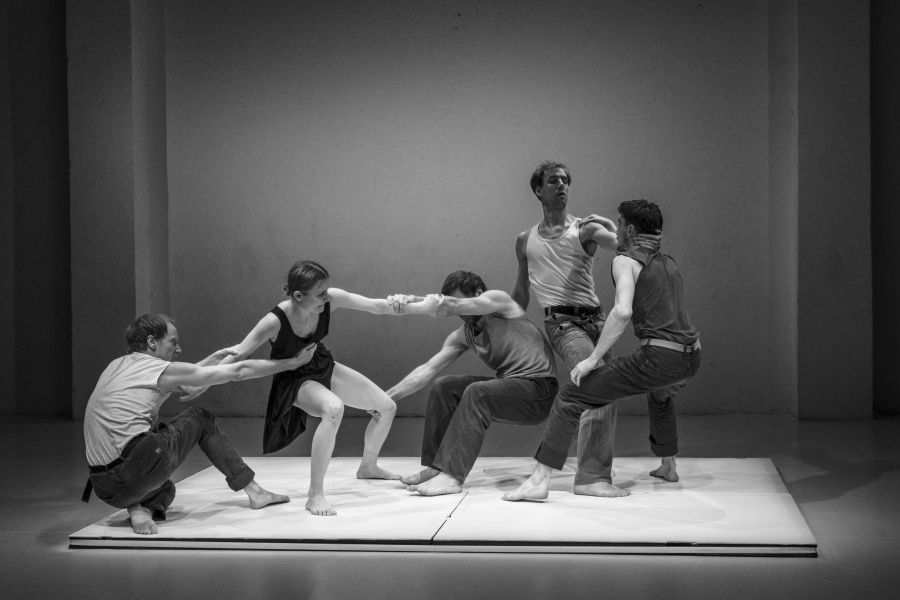 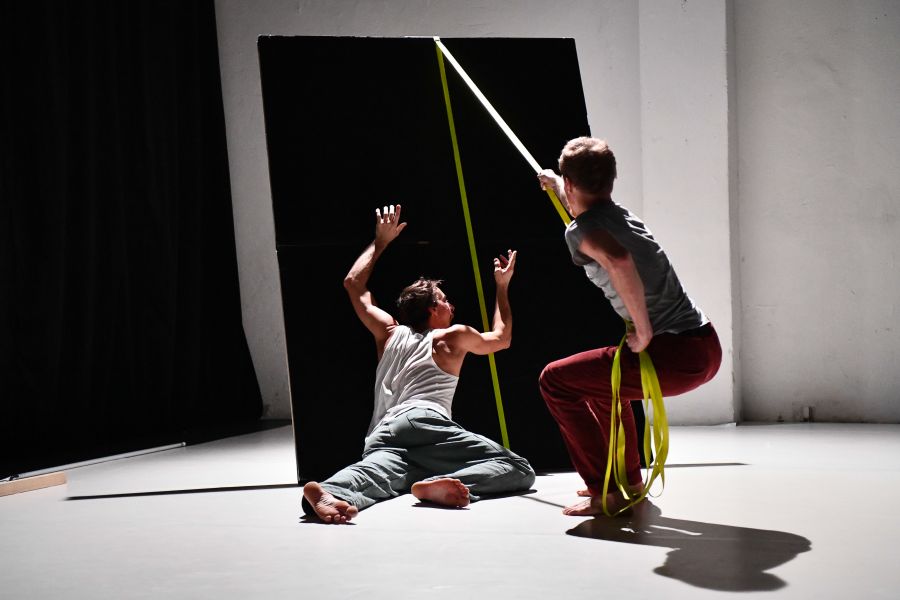 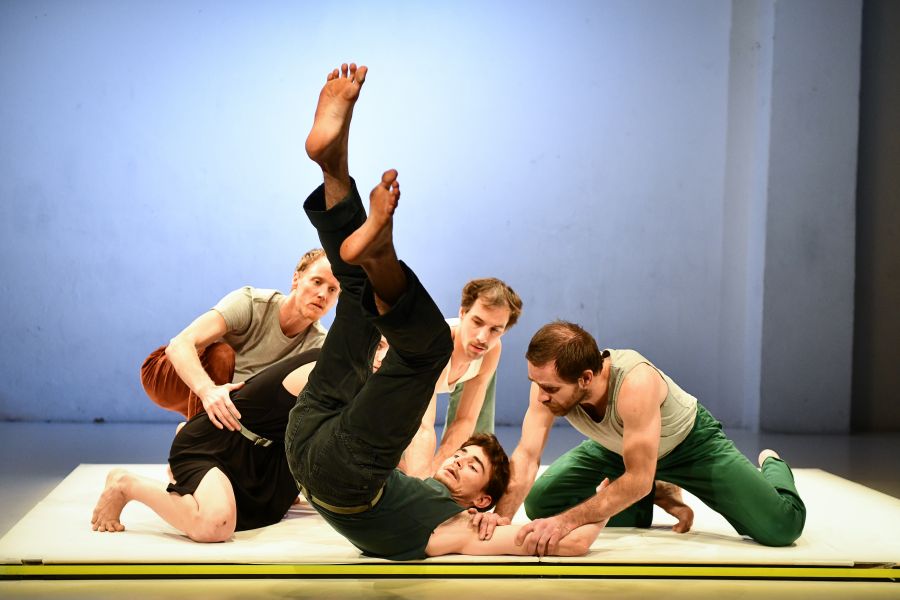 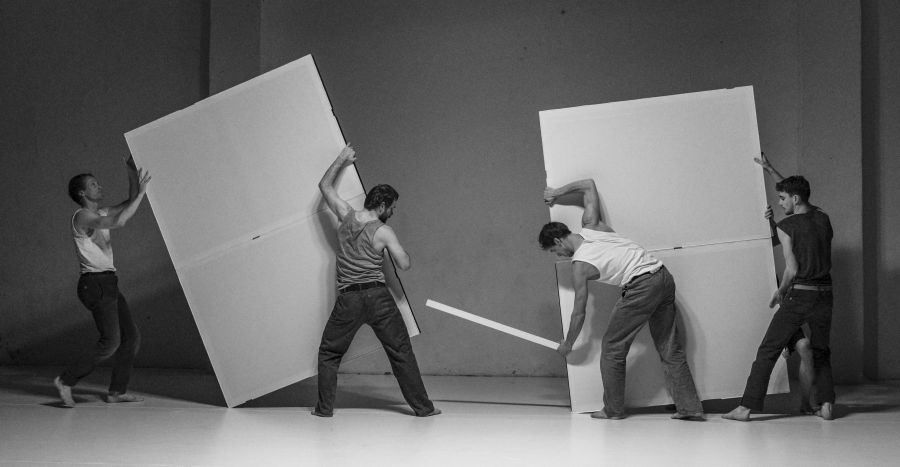 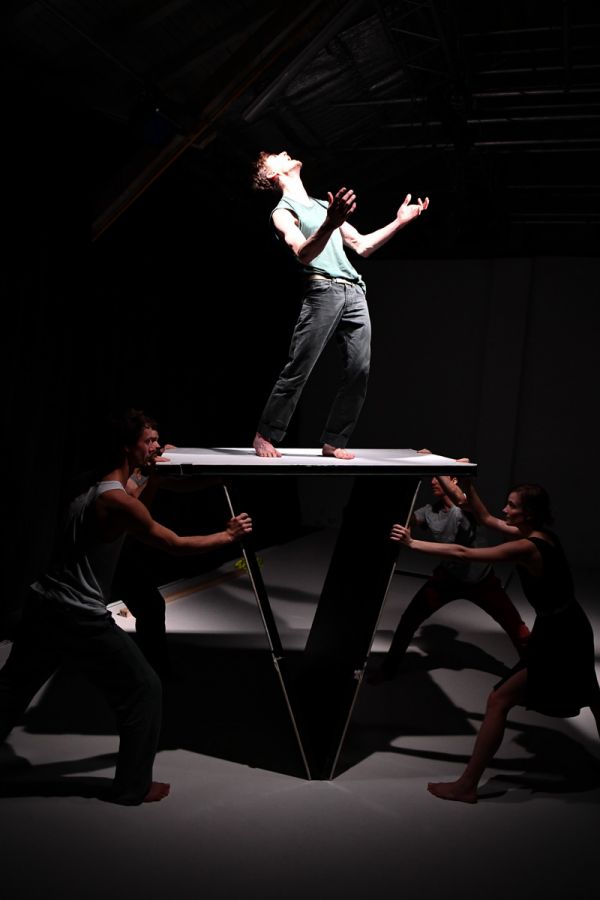