A fierce and ironic perspective of young creative minds on the phenomena of reign and outdated patriarchal stereotypes. A thorough analysis of the utilitarian behaviour of the political establishment across modern history directed by Anna Klimešová.
Discussion follows.

The eclecticisms and initial sketch-like character in the form of depictions of different types of governance gradually melt into a disturbing and remarkably compact image of humanity with all its grand circles of disgracefulness, which forms not only our past, but also our present (as we can feel from the numerous hints in the production), and if something does not change, also our future.
Dominik Melichar, Divadelní noviny, 7/2019
directed by Anna Klimešová

dramaturgy Petr Erbes
set design Klára Fleková
music Michal Cáb
cast Cyril Dobrý, Kryštof Krhovják, Štěpán Lustyk, Milan Vedral, Vojtěch Vondráček
Premiere 16 March 2019
Anna Klimešová (1990) ranks among the most striking voices of the young generation of theatre-makers. She decided to follow the path of a director after her year long experience in an internship in Berlin, where she broadened her practice while studying drama education at JAMU. Although she is currently completing her Master’s degree at KALD DAMU, she has already managed to make her mark in the Czech theatre world with her existing projects –Barunka is Leaving, Zápisky z volných chvil, Hlupáci z Chelmu, S vůní perníku, etc. She was invited to direct at Činoherní studio Ústí and Labem (Ticho po pěšině, 2018), National Theatre Brno (Zemský ráj to na dohled?, 2019), Divadlo Minor (Nanuk, 2019), Naivní divadlo Liberec (Hvězdný posel, 2020) and Stará aréna Ostrava, where she created the production Cesta do Ameriky (2016) or the trashy detective story Mrtvé oči (2017). In the Klicperov divadlo in Hradec Králové, she staged the music revue Proč nemohu spát (2017) or at Reduta Theatre, Brno, the collective “existential farce from the near future” Zemský ráj to na dohled? (2019). She is the leader of the cultural community platform Horní Maršov – Otevřené muzeum, which aims to connect the inhabitants of the town with the community of young artists.
The authorial principle is very characteristic for the work of Anna Klimešová. Her productions are created collectively, favouring the principle of assembling over interpretation of solid text, where the whole creative team has a say in the creative process: “I am happy when actors are open to searching, when they feel joint responsibility for what is happening on stage.”
She co-founded the 8lidí group where they create atypical theatre projects such as the audio-walk Kleopatra, the collage La Moneda based on a Márquez text (both 2020) or a pressing testimony about disinformation and journalist ethics Press Paradox (2018), which she presented at the Flora Theatre Festival.
Her production The Prince was awarded the the Jury Prize at the competition festival FAST FORWARD in Dresden, together with a four-week artistic residency stay in Saxony within the project Neue Heimat Dresden 2025 organised by Dresden – European City of Culture of 2025.
Divadlo Komedie has been part of the Prague City Theatres again since 2018 (together with Rokoko theatre and ABC theatre), where it has operated with a short break from 1954. The formation of the poetics of the theatre was influenced mainly by Ota Ornest (1954–1972) with an array of directors (Alfréd Radok, Miroslav Macháček) and acting legends (Jaroslava Adamová, Svatopluk Beneš and Rudolf Hrušínský). During the 1990s, the theatre became popular with audiences because of its unconventional dramaturgy and innovative approach to classic texts which were staged by the director Jan Nebeský and the artistic director Michal Dočekal (1994–2002). After he left in 2002, Dušan D. Pařízek and David Jařab’s project of the Prague Chamber Theatre won the open call. They established the Divadlo Komedie theatre to be one of the most progressive theatres, with its repertoire based on German and Austrian drama. Despite the critical acclaim as well as unique interest of audiences, the ensemble ended their activities in 2012 due to underfunding from the Prague magistrate.
During 2012–2016, the theatre was artistically operated by Divadlo Company.cz group focusing on East European dramatic works. Due to reconstruction, the space served as a home base to Divadlo Na zábradlí the next two years.
In 2018, the new director Daniel Přibyl took over the theatre and initiated its comeback under the heading of Prague City Theatres. With its ambitious repertoire, it aims mainly at a young audience with young theatre-makers such as Michal Hába (An Enemy of the People, King Ottokar’s Fortune and End, Heroes of Capitalist Labour), Anna Klimešová (The Prince), Adam Steinbauer (Politicians), Jakub Maksymov (Tesla) or Lukáš Brutovský (Hussite Trilogy). The attractive drama pieces in the repertoire are accompanied by, for example, dance performances by the choreographer Lenka Vágnerová (La Loba, Amazonky, Panoptikum aj.) or the popular Bowie musical Lazarus (Erika Stárková as “Dívka” was awarded the Theatre Critics’ Award 2019). The artistic efforts of the re-established management were crowned by the Theatre Critics’ Award immediately after the first season with the title of Theatre of 2019.
photo Martin Špelda 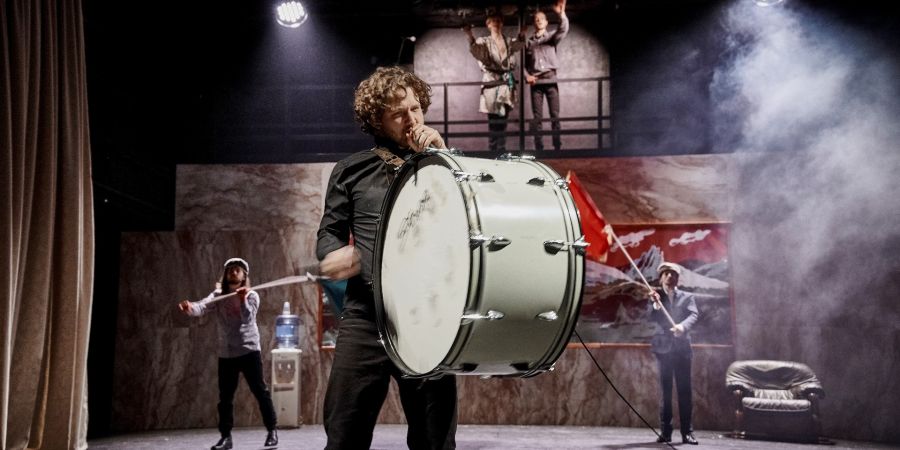