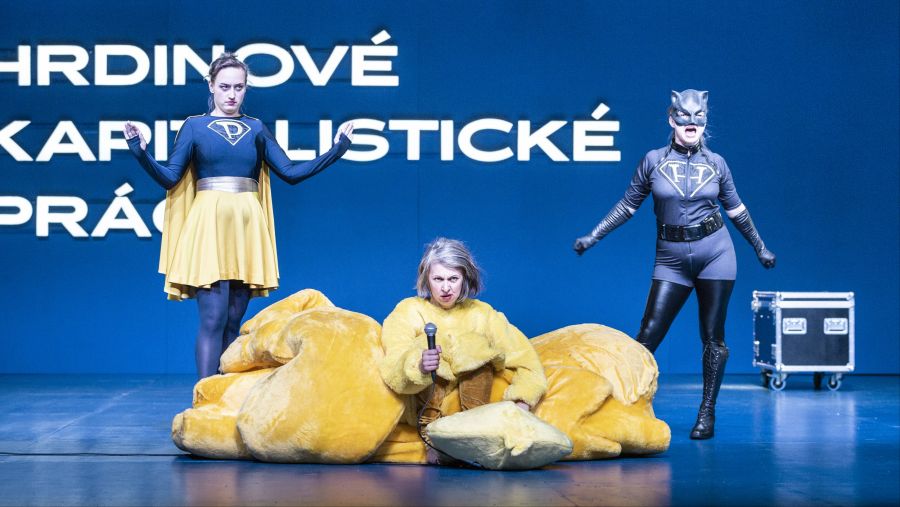 Hába, as a fighting leftist intellectual, wants to criticise capitalism and liberal democracy and argue that the above-mentioned system needs to change or even be taken to pieces – the text by Saša Uhlová becomes a very suitable medium for that.
Martin J. Švejda, Lidové noviny, 22 September 2020
Heroes of Capitalist Labour under the baton of the Prague City Theatres is a radical and merciless piece. It is an important testimony about the different sides of the post-communist system that are oftenswept under the rug.
Kristýna Čtvrtlíková, Informuji.cz, 15 September 2020

screenplay and directed by Michal Hába

Audience note:
The production uses explicit vulgarisms, smoke from a fog machine as well as cigarettes.
The production was created with the support of the Deutsch-Tschechische Zukunftsfonds.
Co-production with Volksbühne Berlin within the international project POST-WEST.
Michal Hába (1986) studied directing at the Department of Alternative and Puppet Theatre of the Academy of Performing Arts in Prague. He worked as an assistant to the directors Dušan D. Pařízek and Alexander Riemenschneider at Divadlo Komedie. He also served internships at Volksbühne am Rosa-Luxemburg-Platz (with Frank Castorf) and Maxim Gorki Theater (with Sebastian Baumgarten). He took part in the Berliner Theatertreffen International Forum (2016).
His work stands out mainly thanks to dramaturgical precision and the open leftist opinions exposed on the stage. Artistically, he claims allegiance to Bertolt Brecht’s legacy and his directorial style is inspired in distinct German theatre-makers such as Frank Castorf, René Pollesch, Christoph Marthaler, Herbert Fritsch and mainly Christoph Schlingensief. He focuses mostly on current political-critical theatre and tries to react to the current social developments.
He is the head of the theatre ensemble Lachende Bestien, which is considered one of the most progressive theatre troupes on the Prague theatre map and which avows political and appellative theatre: with the ensemble he staged e. g. Ferdinand!, The Mission or Palace at the Loire. His original adaptation of Schwab's Pornogeography was awarded the Josef Balvín Award in 2016.
He cooperates with Divadlo Husa na provázku, (The Gambler, 2018) and Klicperovo divadlo Hradec Králové (The Miser, 2019, Who‘s Afraid of Virginia Woolf, 2020).
His projects are based on current as well as classic texts, which he deconstructs and enriches with new meaning and therefore offers more potential readings to the audience. His work at the Prague City Theatres can serve as proof of this: Ibsen’s An Enemy of the People (2019), Grillparzer’s King Ottokar’s Fortune and End (2019) or his last piece The Heroes of Capitalist Labour (2020).
He also works with Divadlo koňa a motora (Theatre of Horse and Engine), which combines the tradition of travelling theatre with a community and social overlap, while aiming at bringing peripheral areas back in touch with culture. With Olomouc based Divadlo na cucky, he created an original production Opletal, which premiered at the 2018 Flora Theatre Festival.
I am not trying to provoke or upset people. (…) Theatre does not need to forcedly hold on to metaphors or cheap provocation. Theatre should not create metaphors of the world but try to interpret the current world as a metaphor. It should try to uncover the reality behind the horizon of events. (…) Not to show the ‘bright future’ but to stimulate imagination. As a theatre director, I firmly believe that today it is necessary to mainly stimulate the political one.
Michal Hába in an interview for Divadelní noviny, 1/2020
Divadlo Komedie has been part of the Prague City Theatres again since 2018 (together with Rokoko theatre and ABC theatre), where it has operated with a short break from 1954. The formation of the poetics of the theatre was influenced mainly by Ota Ornest (1954–1972) with an array of directors (Alfréd Radok, Miroslav Macháček) and acting legends (Jaroslava Adamová, Svatopluk Beneš and Rudolf Hrušínský). During the 1990s, the theatre became popular with audiences because of its unconventional dramaturgy and innovative approach to classic texts which were staged by the director Jan Nebeský and the artistic director Michal Dočekal (1994–2002). After he left in 2002, Dušan D. Pařízek and David Jařab’s project of the Prague Chamber Theatre won the open call. They established the Divadlo Komedie theatre to be one of the most progressive theatres, with its repertoire based on German and Austrian drama. Despite the critical acclaim as well as unique interest of audiences, the ensemble ended their activities in 2012 due to underfunding from the Prague magistrate.
During 2012–2016, the theatre was artistically operated by Divadlo Company.cz group focusing on East European dramatic works. Due to reconstruction, the space served as a home base to Divadlo Na zábradlí the next two years.
In 2018, the new director Daniel Přibyl took over the theatre and initiated its comeback under the heading of Prague City Theatres. With its ambitious repertoire, it aims mainly at a young audience with young theatre-makers such as Michal Hába (An Enemy of the People, King Ottokar’s Fortune and End, Heroes of Capitalist Labour), Anna Klimešová (The Prince), Adam Steinbauer (Politicians), Jakub Maksymov (Tesla) or Lukáš Brutovský (Hussite Trilogy). The attractive drama pieces in the repertoire are accompanied by, for example, dance performances by the choreographer Lenka Vágnerová (La Loba, Amazonky, Panoptikum aj.) or the popular Bowie musical Lazarus (Erika Stárková as “Dívka” was awarded the Theatre Critics’ Award 2019). The artistic efforts of the re-established management were crowned by the Theatre Critics’ Award immediately after the first season with the title of Theatre of 2019.
photo Patrik Borecký 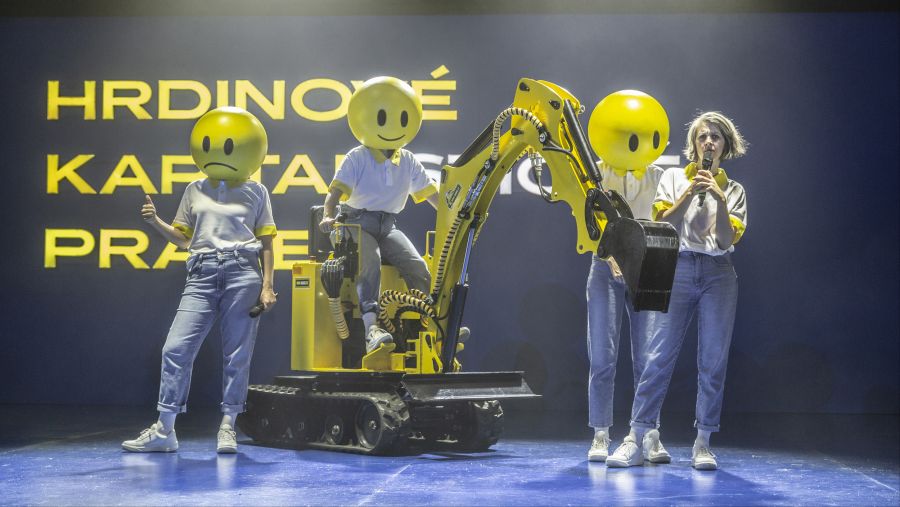 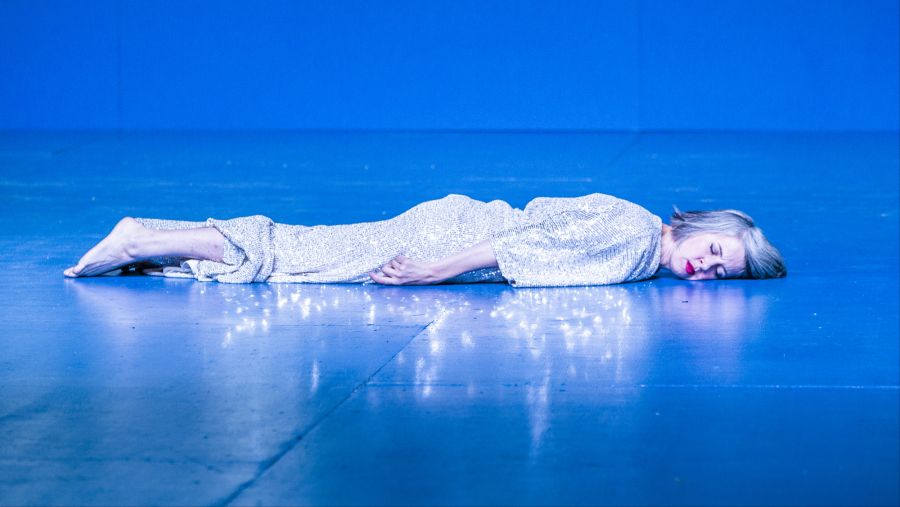 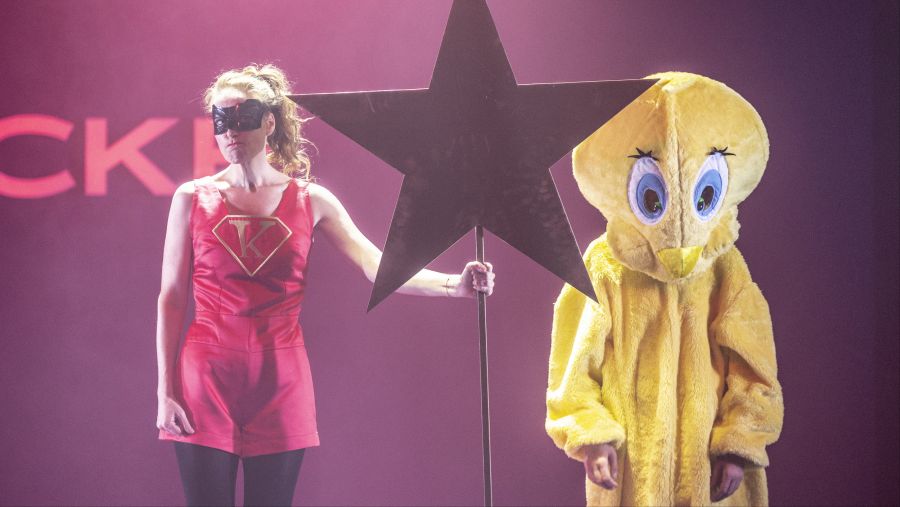 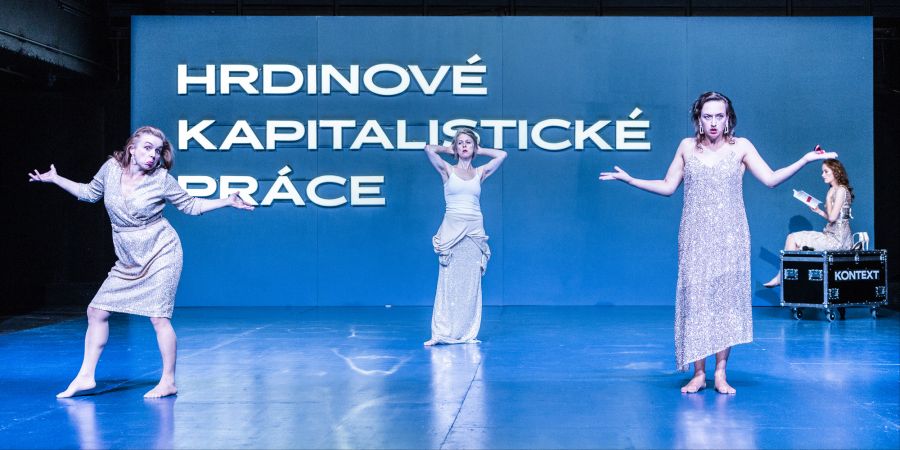 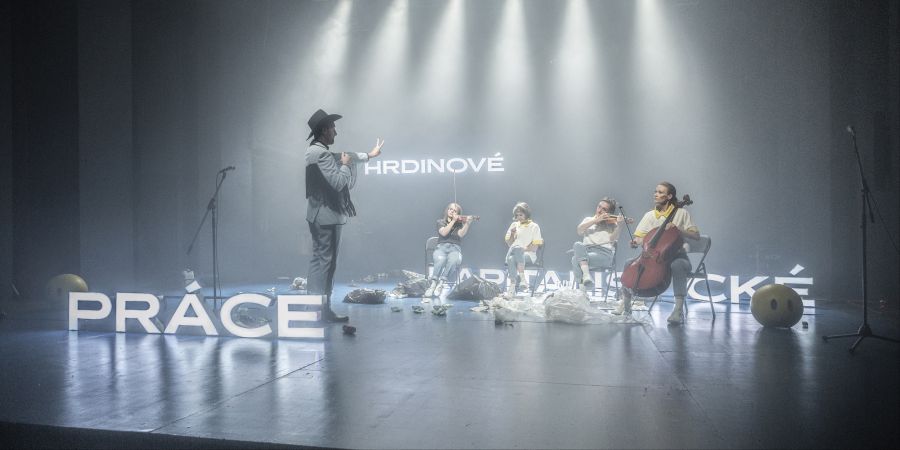 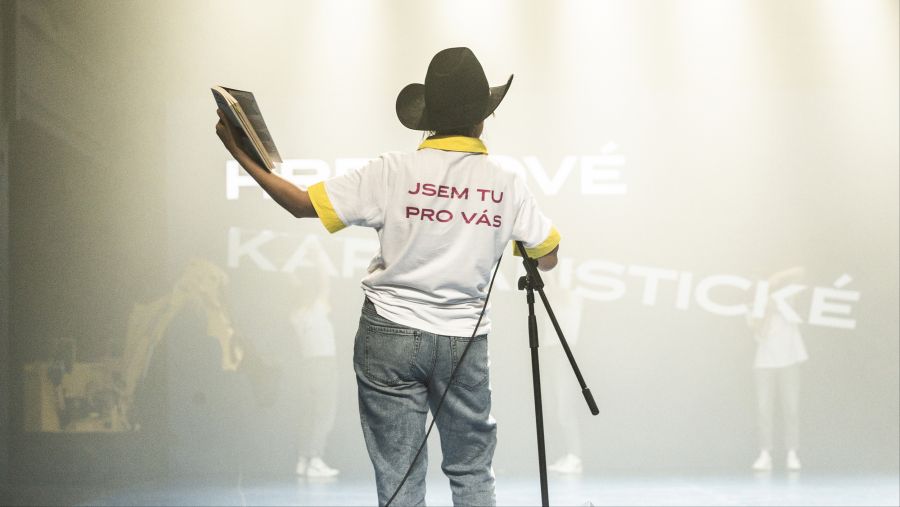 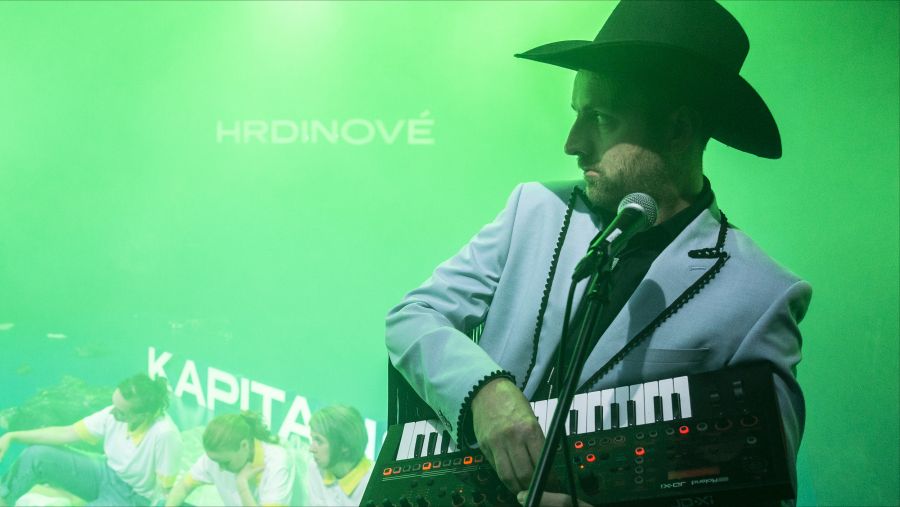