An apt commentary on Czech servility as well as the boorishness of the modern “elites” in an absurd satire of the contemporary political situation. A formally original, linguistically stylised, highly-appraised dramatic text in a playful sometimes willingly misleading direction of Michal Hába.
Discussion follows. 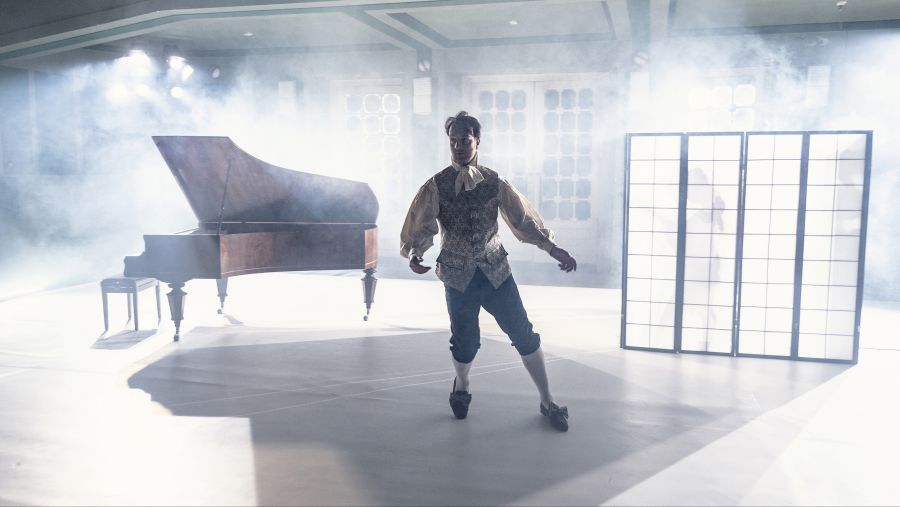 The production Palace by the Loire represents an intelligent political satire which is rarely found in the Czech context. The actors do not condescend to cheap jokes, their comical creations are kept on a tight rein by Sikora’s elaborate and poetic language as well as Hába’s unambiguous stage message.
Marcela Magdová, Divadelní noviny, 2/2020
Sikora’s and Hába’s Palace by the Loire amusedly exposes the primitiveness of the nouveau riche, points to the undervaluation of work in the market environment as well as the still persisting differences and mutual hostility between the inhabitants of Western and Eastern Europe. It is a well-articulated and convincing satirical reflection.
Saša Hrbotický, Deník N, 30 January 2020
directed by Michal Hába & coll.
dramaturgy Olívia Fantúrová
set design Adriana Černá
production Hana Svobodová
music Jindřich Čížek & coll.
cast Zuzana Onufráková, Jindřich Čížek, Michal Hába, Bořek Joura
Premiere 20 December 2019
Michal Hába (1986) studied directing at the Department of Alternative and Puppet Theatre of the Academy of Performing Arts in Prague. He worked as an assistant to the directors Dušan D. Pařízek and Alexander Riemenschneider at Divadlo Komedie. He also served internships at Volksbühne am Rosa-Luxemburg-Platz (with Frank Castorf) and Maxim Gorki Theater (with Sebastian Baumgarten). He took part in the Berliner Theatertreffen International Forum (2016).
His work stands out mainly thanks to dramaturgical precision and the open leftist opinions exposed on the stage. Artistically, he claims allegiance to Bertolt Brecht’s legacy and his directorial style is inspired in distinct German theatre-makers such as Frank Castorf, René Pollesch, Christoph Marthaler, Herbert Fritsch and mainly Christoph Schlingensief. He focuses mostly on current political-critical theatre and tries to react to the current social developments.
He is the head of the theatre ensemble Lachende Bestien, which is considered one of the most progressive theatre troupes on the Prague theatre map and which avows political and appellative theatre: with the ensemble he staged e. g. Ferdinand!, The Mission or Palace at the Loire. His original adaptation of Schwab's Pornogeography was awarded the Josef Balvín Award in 2016.
He cooperates with Divadlo Husa na provázku, (The Gambler, 2018) and Klicperovo divadlo Hradec Králové (The Miser, 2019, Who‘s Afraid of Virginia Woolf, 2020).
His projects are based on current as well as classic texts, which he deconstructs and enriches with new meaning and therefore offers more potential readings to the audience. His work at the Prague City Theatres can serve as proof of this: Ibsen’s An Enemy of the People (2019), Grillparzer’s King Ottokar’s Fortune and End (2019) or his last piece The Heroes of Capitalist Labour (2020).
He also works with Divadlo koňa a motora (Theatre of Horse and Engine), which combines the tradition of travelling theatre with a community and social overlap, while aiming at bringing peripheral areas back in touch with culture. With Olomouc based Divadlo na cucky, he created an original production Opletal, which premiered at the 2018 Flora Theatre Festival.
I am not trying to provoke or upset people. (…) Theatre does not need to forcedly hold on to metaphors or cheap provocation. Theatre should not create metaphors of the world but try to interpret the current world as a metaphor. It should try to uncover the reality behind the horizon of events. (…) Not to show the ‘bright future’ but to stimulate imagination. As a theatre director, I firmly believe that today it is necessary to mainly stimulate the political one.
Michal Hába in an interview for Divadelní noviny, 1/2020
Alternative theatre ensemble Lachende Bestien from Prague was formed around the current artistic director Michal Hába, musician Jindřich Čížek and stage designer Adriana Černá already in 2011. The ensemble first operated in the Eliadova knihovna at Divadlo Na zábradlí and only found their permanent home in the ‘contemporary life art den’ in Venuše ve Švehlovce in 2015.
The creative team introduced themselves already with their debut in 2011 – a variation on de Sade’s controversial novel focusing on the borders of imagination and humanness, formally bridging drama, demonstration and performance. The production 120 dní svobody (120 Days of Freedom) resounds even today and de facto characterised the direction of the works which stimulate the audience and incite an active dialogue.
Even before their permanent residency at Žižkov, Lachende Bestien produced several original productions such as Pláč nočního kozodoje (2013) based on Kurt Vonnegut’s Slapstick or Kohlhaas Terror (2014) based on a novel by Heinrich Kleist. They gained their renown by staging the Werner Schwab drama Pornogeography (2015), for which they were awarded the Josef Balvín Award in 2016. Their current repertoire includes original projects – e. g. the production Ferdinande! (2016) inspired by Václav Havel’s work and focusing on the topic of an intellectual in the public space and Sezuan (basierend auf Brecht) based on Brecht’s The Good Person of Szechwan (2017). They also work with adaptations of ‘traditional’ theatre texts such as Müller’s Mission (2018), Ibsen’s An Enemy of the People (2019, co-production with the Prague City Theatres) or Sikora’s Palace at the Loire (2020).
The ensemble often thematises and questions the idea of capitalism and systematically studies social injustice. As a result, Lachende Bestien is a socially and critically appellative theatre which, however, does not lack self-irony and a detached view over serious topics.
photo Patrik Borecký 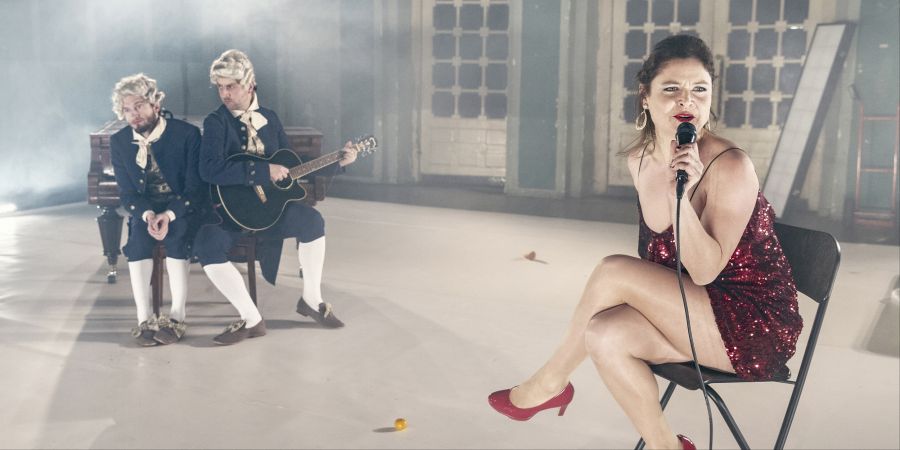 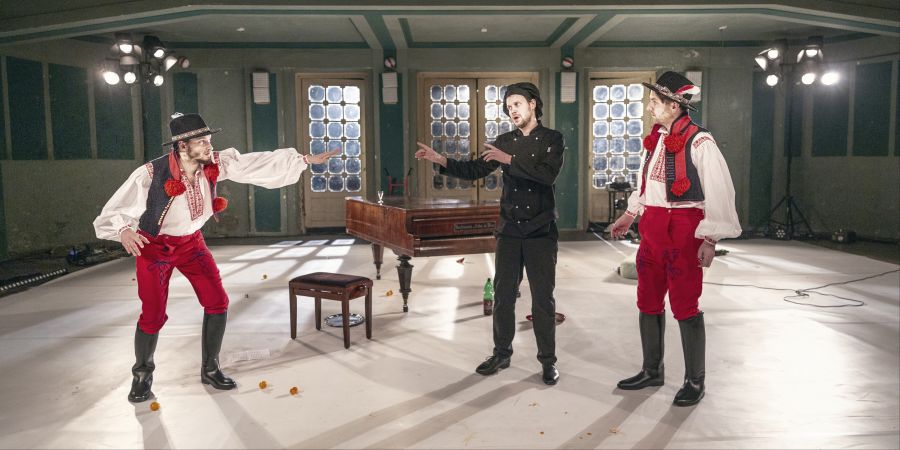 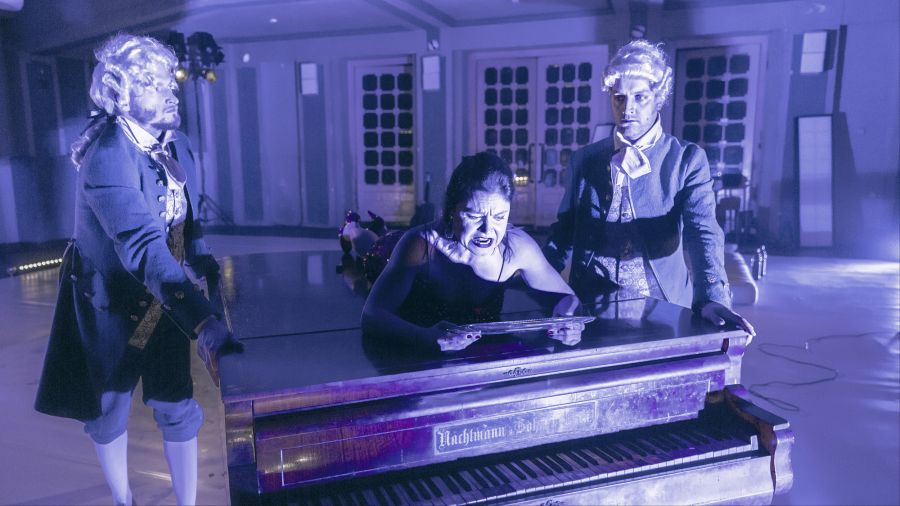 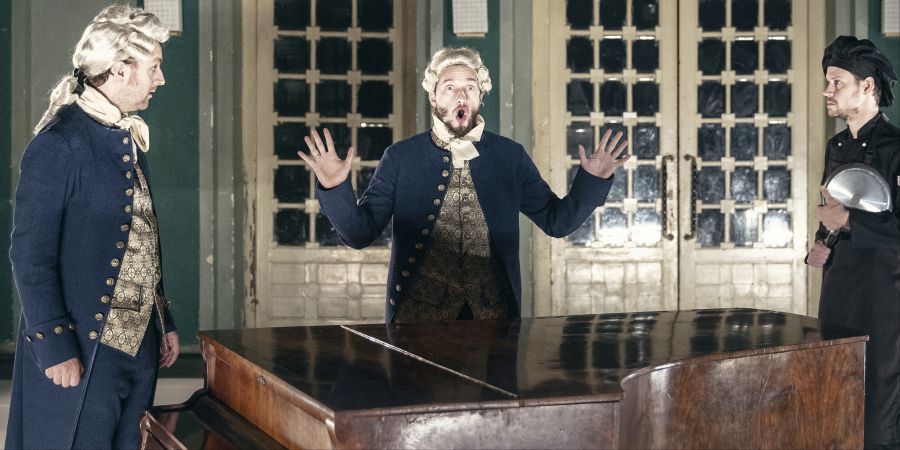 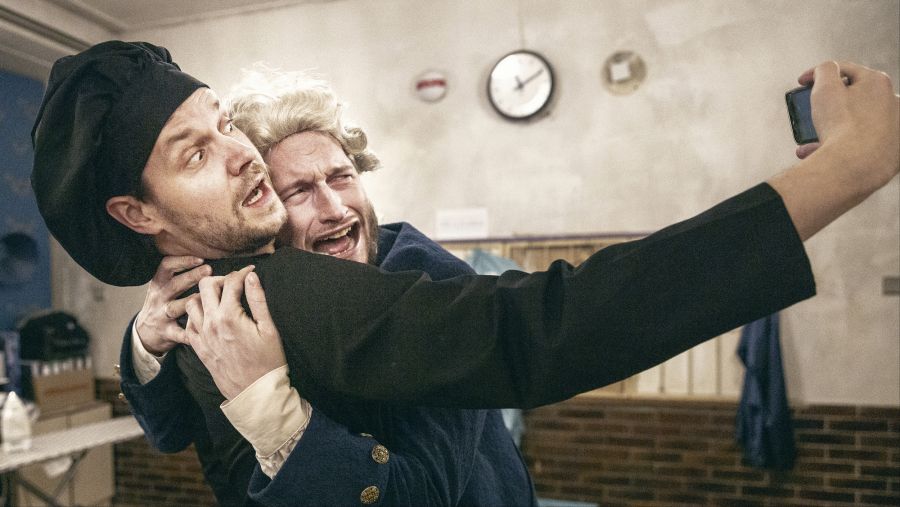